Not Your Creepy Uncle's Pot Mag

Not Your Creepy Uncle's Pot Mag

WHY YOU SHOULD CARE

Because freedom of speech, man.

Gazing down at the magazine in my hands, I was stunned. It was elegant, well designed and contained 80 full-color pages. And it was dedicated to marijuana. “Fuck, this is so not High Times,” I thought. I was in the swirling chaos of GeekFest, an annual photojournalism conference that hits a different city every year. Drunken photojournalists as far as the eye could see. And here was Daniel Berman, lead photographer and designer of Northwest Leaf, presenting me with a brand-new issue. He beamed as if it were his firstborn.

On the cover, a youth with floppy blondish hair was laughing in an open field of weed, holding a monstrous 3-pound joint held together with 24-karat gold wrapping papers. I don’t even smoke, but that guy looked fun. Over too much coffee and a bowl of fruit, I relayed this story to Northwest Leaf’s owner, founder and editor-in-chief Wes Abney, during a recent meetup just north of Seattle. Abney laughed and explained how he leveraged the knowledge he gained working for his local junior college newspaper and the various odd jobs of his youth to become the owner of an expanding million-dollar publishing venture — in an era where print is supposedly dead. “I’m literally running, like, a million-dollar company out of a desk in the corner of my master bedroom,” Abney says. (The work-at-home dad now has office space near downtown Seattle too.)

Wes Abney, founder and editor-in-chief, at the Northwest Leaf office in Seattle.

Like so many great ideas, the basic idea of Northwest Leaf hit Abney in 2010 as, um, medication was passed from person to person in his living room. He had seen some of the print magazines from San Francisco and knew he could do better. “Even at my community college paper, as pressured as we were, we produced great work compared to what I was seeing from the pot industry.” Abney, who’d watched medical marijuana help a friend recover from a terrible motorcycle accident, wanted to be a part of the industry, but as a parent he didn’t want to grow or sell. Creating a publication focused on advocacy and education was the answer.

In June 2010 Abney and his former partner borrowed $1,600 to print 10,000 copies of the first issue of Northwest Leaf. It consisted of 16 pages of newsprint and had zero paid advertising. For the second issue a month later, they sold an ad package for $1,500. Their third issue in August coincided with Seattle’s Hempfest, and Northwest Leaf printed 30,000 copies, selling $8,000 worth of ads. A second title, Oregon Leaf, was launched in July 2014. Alaska Leaf is set to roll out this May, and a California edition should be available by 2017. 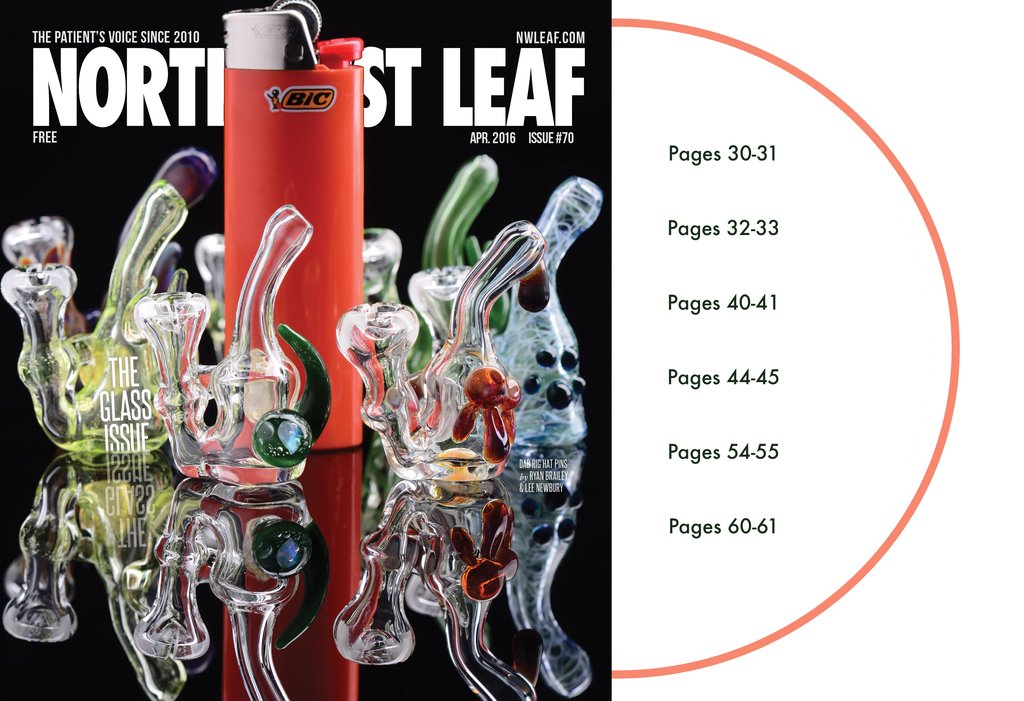 Strict laws mean that marijuana companies can’t advertise across state lines, so Northwest Leaf’s regional publications are all vying for different ad dollars. Distribution is tricky too — it’s a felony to mail publications like Northwest Leaf through the U.S. postal service. Alaska Leaf will be printed in Seattle and floated on a barge to get to Alaska.

Still nibbling fruit and drinking coffee, I tell Abney I envision a future where someone like Condé Nast buys him out. He laughs, “That’s actually exciting, even though I don’t know if I’d ever sell the magazines. Either way, that’s exciting.”

What Do Crimefighters Read When They're Not Battling Evil?

The big, blue hero (of the super variety) is back on TV.

Greater Than Gatsby: My Mom and the F. Scott Fitzgeralds

The summer my mom spent with Zelda and F.

Fritzia Irízar is rocking Mexico’s art world, and she left her paints at school.

How Feminist Is Your Syntax?

How one sci-fi writer broke a big linguistic barrier for females back in the 1980s.

A Dictionary Fit for the Devil

Jason Borders’ chosen art, carved into the bones and skulls of the departed, takes deep delight in our main gateway to eternity: our heads.

Want to Be a Writer? Get an MBA

Half a decade ago, a best-seller in India meant tens of thousands of copies.

When Your Twin is a Famous 'Baywatch' Star, And You're Not

Everyone has a celebrity doppelgänger, right? Author Caroline Paul has one — for real.

Kafka in Lagos and Other Nigerian Fantasies

A Nigerian author who says the Internet was his M.

When the World’s Most Famous Mystery Writer Vanished

In December 1926, crime writer Agatha Christie engineered what remains her greatest mystery: her own unsolved disappearance.

The Hip-Hop Novelist to Add to Your Reading List

A hip-hop artist and slam poet’s debut novel hits the U.

These “adult picture books” make fortune-tellers, villains and everyday souls come to life on the page.

Will Francisco Sionil José Ever Win the Nobel Prize?

Southeast Asia has been neglected for way too long.